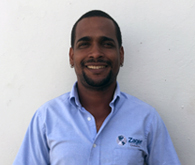 Alex Dilone is our “hybrid” Project Manager, with backgrounds in both plumbing and electrical applications. Alex received his electrical certification and education back in 2000 and later came to Zager Global, Inc. in 2007 where he has become a highly skilled commercial plumber.

When the company expanded it’s services to include solar PV and solar thermal installations; Alex was at the forefront, making sure our installations were code-compliant and met the client’s expectations.

Since then Alex has worked on numerous solar PV and solar thermal installations for the company and most recently he served as Project Manager for a 1.3 megawatt solar PV project at Fort Buchanan in San Juan, Puerto Rico. That massive project consisted of over five thousand solar panels spread across three rooftops and Alex demonstrated an exemplary level of attention to details, along with exceptional communication skills between the client, Army personnel and the management team back here at the Zager Global, Inc. corporate offices.